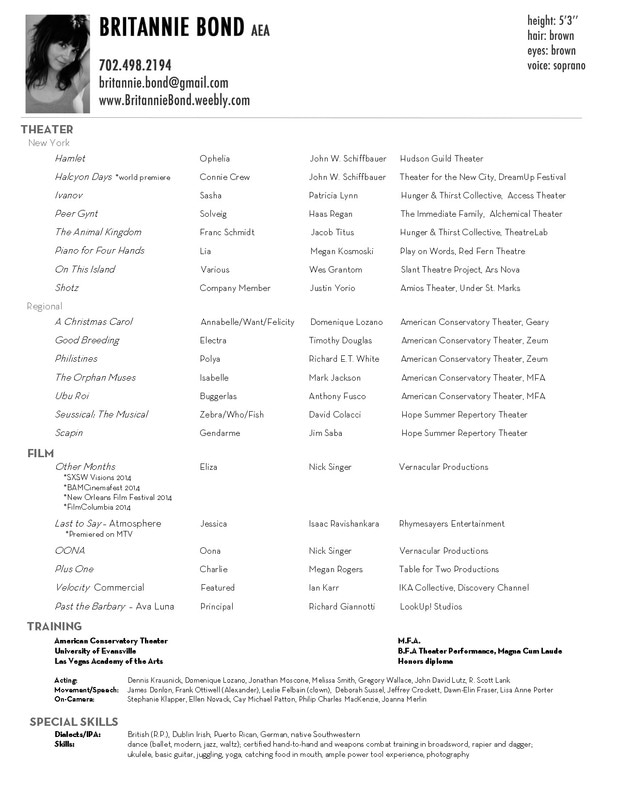 
NYC credits include: Ophelia in Hamlet, Halcyon Days at Theater for a New City and work with Slant Theatre Project, Amios Theater Company, The Immediate Family, The Group Lab, terraNova Collective and Hunger & Thirst Theatre Collective. She can also be seen on MTV in the music video for Atmosphere's "Last to Say" (dir. Isaac Ravishankara) and in the new web series, Plus One.


MFA / American Conservatory Theater, BFA / University of Evansville.
"[In Robert O'Hara's GOOD BREEDING] Britannie Bond plays Electra as punky and plucky, eager to take the weight of the play on her shoulders."

"This is what I mean about filmmakers having the courage to venture forth into unknown narrative waters without clinging to the life preservers of contrived plot twists and quirky dialogue. OTHER MONTHS is the type of film that makes SXSW special in that such an exploratory film without stars is programmed in a very selective category. If only there were more such courageous young filmmakers as well as more festival programmers who were as equally bold. I can’t wait to see Singer’s next film."
Mike S. Ryan, Hammer to Nail


"When we first meet Ophelia, played by Britannie Bond, she plays the role of young women in love very well. As the story moves on, and she goes crazy for her father’s death, her grief is believable. Hamlet is not a one man show - it is a cast and crew who’s individual roles complimented one another. Everyone involved in this production has incredible experience in theatre. Schiffbauer did a great job in producing a timeless classic."
Melissa Zarate, CelebrityCafe.com


"...and Britannie Bond, quite sharp and on point as Sasha, who naively believes she can restore Ivanov's joy of life. This production proves that when you combine comedy and drama successfully, people can walk away not only moved to tears, but amused as well. That's how life is!"
EntertainmentScribe.com